Twelve months ago, the group now known as Islamic State (IS), (ISIS), or (ISIL) was barely heard of in theMiddle East and not recognised on the international stage except by young, radicalised social misfits that felt compelled to join such  groups as fighters or those in the security and academic worlds monitoring extreme Islamic developments in Syria and Iraq.

Even at the beginning such groups were dismissed by most Western observers as just another of the multitude taking advantage of the chaos created in Syria by the wide-ranging conflict with President Bashar al-Assad. What a big mistake that turned out to be.

In January 2014, US President Barack Obama downplayed the capabilities and threats posed by those flying the al-Qaeda flag in Falluja and elsewhere across Iraq and Syria.

But within a few months, IS controlled a vast and valuable swathe of territory across northern Syria and Iraq.

Former US Secretary of Defence Chuck Hagel described IS as being as “sophisticated and well-funded as any group that we have seen”. “They’re beyond just a terrorist group… they are tremendously well funded,” he said.

More than with any other militant group perhaps, the focus of the international community’s attention is on the finances of IS – the revenue it earns from oil, taxation, extortion and looting.

The US-led coalition has directed a considerable portion of its air strike effort against the oil refineries and smuggling routes believed to be the mainstay of the group’s financial survival in the belief that disrupting funding sources will ultimately precipitate its demise.

The importance of financing in conflict is as old as conflict itself. The Roman orator Marcus Tullius Cicero observed that “the sinews of war [are] a limitless supply of money.”

However, the end of the Cold War, and the use of UN Security Council resolutions against countries such as Libya and Sudan, saw a dramatic decline in state-sponsored terrorism.

Whilst organisations such as Hezbollah continue to operate with state backing, post-Cold War terrorist organisations have mostly been unable to rely on state sponsorship, thus needing to source their own financing.

Skilful financial management is at the heart of the success of any terrorist or insurgent organisation – it represents their lifeblood but is also one of their most significant vulnerabilities.

Securing and maintaining reliable funding is the key to moving from fringe radical group to recognised terrorist organisation – from a hand-to-mouth existence to a more planned and organised model.

Successful groups are often defined as much by their skills as financial managers as they are by their military expertise and ability to recruit fighters.

In general, terrorist groups can draw on financing from two primary sources

Donations are also sometimes transferred between like-minded terrorist groups. For example, the Nigerian group Boko Haram reportedly received $250,000 from al-Qaeda in the Islamic Maghreb (AQIM) in 2012.

Whilst donations can provide a source of initial “seed-funding”, they are vulnerable to disruption by the authorities and the supply is unreliable.

To establish financial independence, terrorist groups need to move from primarily external funding to internal, self-generated funding that is more difficult for the international community to disrupt.

Al-Shabab in Somalia is a good case in point. Whilst the group receives some limited funding from external sources, it has developed a highly effective charcoal export business which generates up to $80m a year,according to the UN.

Al-Shabab has also mastered another funding tool – business, personal and transport tax. Like IS, al-Shabab controls territory and population, operating a form of quasi-government in the areas under its control – raising taxes and offering some services, particularly security and justice, in return.

IS promises services and food supplies to Muslims in areas it controls.

The control of territory also allows lucrative businesses, such as the growing of opium poppies in Afghanistan, to flourish.

Over $7bn has been spent on fighting the drugs trade in the country yet despite 13 years of a Nato-led effort, poppy cultivation is at an all-time high, with the Taliban exploiting Afghanistan’s position as the supplier of over 90% of global opium output to earn up to $150m a year. 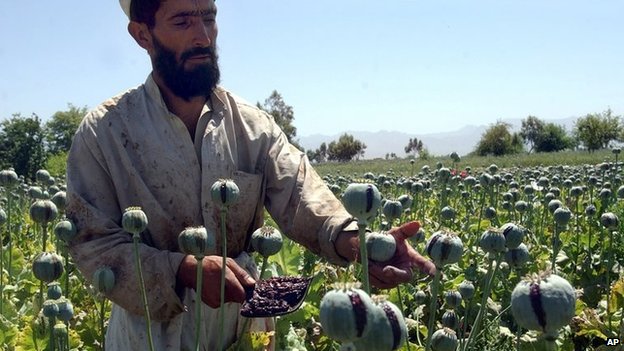 Poppy farms are flourishing in Afghanistan

But not all groups control territory containing populations ripe for taxation and extortion.

Based in the vast, sparsely inhabited regions across the Sahara and Sahel, AQIM raises its funding from two main sources

The Haqqani Network, based in the Afghanistan-Pakistan border region, also relies on smuggling as a key source of finance.

With its roots in the opposition to the Soviet Union’s invasion of Afghanistan in 1979, it controls long-established smuggling routes that benefit from the instability in Afghanistan and Pakistan to support the funds it raises from its extensive criminal activity.

Kidnap for ransom is increasingly used by terrorist groups.

Al-Qaeda in the Arabian Peninsula (AQAP), which is based in Yemen, is estimated to have earned $20m this way between 2011 and 2013. 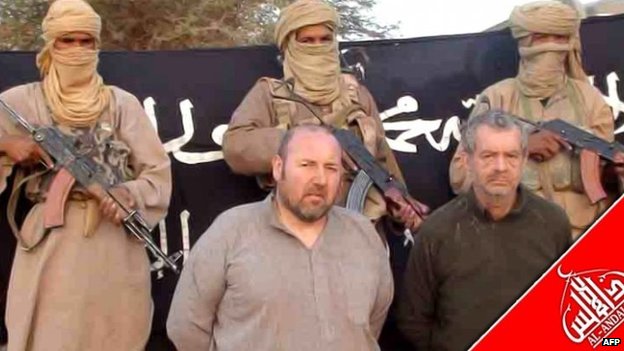 The UN underlines the profitability of this trade, revealing recently that terrorist groups are estimated to have earned $120m in ransom payments from 2004-2012.

IS alone is believed to have raised up to $45m in just the past year.

So if terrorist groups are to establish themselves, survive and thrive, they need to develop reliable sources of financing based on the territory, population and resources where they operate.

That Al-Qaeda in Iraq (AQI) recognised the critical importance of finance is clear from declassified documents captured in Iraq following the 2003 invasion in which the group identified poor money management and irregular income as critical contributors to the group’s failure.

Funding is clearly the lifeblood of a terrorist organisation. It is also its Achilles’ heel.

Since the 9/11 attacks, the international community has sought to disrupt terrorist groups by targeting their finances.

The first step in US President George W Bush’s so-called “war on terror” was to launch “a strike on the financial foundation of the global terror network”.

Yet, as we are witnessing across northern Syria and Iraq, starving extremists of financing is no easy task once they evolve from external reliance to internal self-sufficiency.